“THE 15:17 TO PARIS” Trailer Reveals a True Story of Real Heroes

From director Clint Eastwood, comes “The 15:17 to Paris,” an incredible true story portrayed by the actual heroes who lived it. This February, in the face of fear, ordinary people can do the extraordinary.

Catch the film’s official trailer below and watch “The 15:17 to Paris” in Ayala Malls Cinemas (Trinoma & Greenbelt 1) starting Feb 21.


Clint Eastwood’s drama “The 15:17 to Paris,” about the real-life heroes who derailed a terrorist attack during a highspeed train ride.

In the early evening of August 21, 2015, the world watched in stunned silence as the media reported a thwarted terrorist attack on Thalys train #9364 bound for Paris—an attempt prevented by three courageous young Americans traveling through Europe. The film follows the course of the friends’ lives, from the struggles of childhood through finding their footing in life, to the series of unlikely events leading up to the attack. Throughout the harrowing ordeal, their friendship never wavers, making it their greatest weapon and allowing them to save the lives of the more than 500 passengers on board.

The heroic trio is comprised of Anthony Sadler, Oregon National Guardsman Alek Skarlatos, and U.S. Air Force Airman First Class Spencer Stone, who play themselves in the film.  Starring alongside them are Jenna Fischer (“Hall Pass,” TV’s “The Office”); Judy Greer (“War for the Planet of the Apes”); and Ray Corasani (TV’s “The Long Road Home”).  Paul-Mikél Williams plays the younger Anthony; Bryce Gheisar plays the younger Alek; and William Jennings takes on the role of the younger Spencer.

Eastwood (“Sully,” “American Sniper”) directed from a screenplay by Dorothy Blyskal, based on the book The 15:17 to Paris: The True Story of a Terrorist, a Train, and Three American Heroes by Anthony Sadler, Alek Skarlatos, Spencer Stone and Jeffrey E. Stern.  Eastwood also produced the film, along with Tim Moore, Kristina Rivera and Jessica Meier.  The film’s executive producer is Bruce Berman. 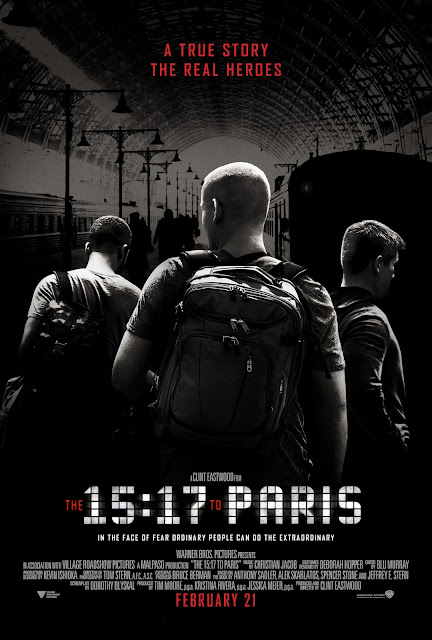