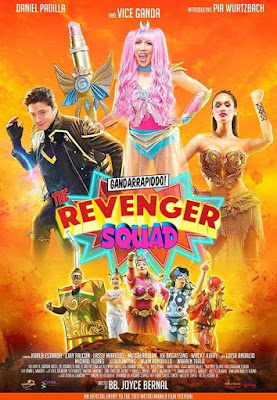 Gandarra (Vice Ganda) is the leader of a superhero group called as "The Revengers Squad" However, after killing the evil Madman, he suffers from an amnesia. From there, he took a good care of Madman's son Chino (Daniel Padilla) who later will have his own powers when he reached the age of 21. To prevent this from happening the rest of the Revengers Squad must keep the secret intact for Gandarra and Chino's safety. However, with Gandarra's sister Cassy (Pia Wurtzbach) lured to the dark side, the team is forced to bring back Gandarra's memory for them to stop a diabolical plan that can cause harm to innocent people.

There is no secret that Vice Ganda's films became successful in box-office. With his funny antics, it isn't hard to love his brand of comedy. However, as the years have passed the trend remains, and we can't seem to find something new about him. His films became repetitive, and some of them are lazily written.

The Revenger Squad's appeal is to bring entertainment and enjoyment to the people. Basically, they have succeeded on that part but not all came out the cinema with smiles on their faces. Some of the jokes were a bit off, yet some are funny and made us chuckle but knowing Vice Ganda's style of comedy, he can basically do more. I remember his version of Petrang Kabayo made me laugh a lot but there are also the times when I was really pissed like  Praybeyt Benjamin 2 where they all need to dance to defuse the bomb. 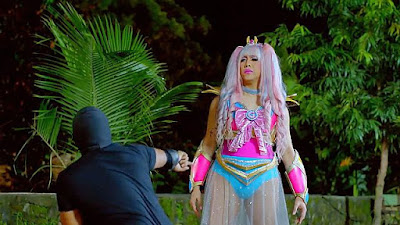 The special effects were neatly done, and we can see that the whole cast is all enjoying their corresponding roles. Vice Ganda still does his comedy well enough but some of his tricks now are a bit over-used. He still provided the spark throughout and handled his superhero role well. Daniel Padilla obviously is simply having fun as Rapido while a stunning Pia Wurtzbach was surprisingly good in her debut film.

Overall, The Revengers Squad is still a crowd-pleaser film. It has its moments, including that entertaining blooper reel at the end. I just wish that Vice Ganda can still come up with a different type of dish the next time around.

Lakwatsera Lovers rates it 4 out of 10 stars