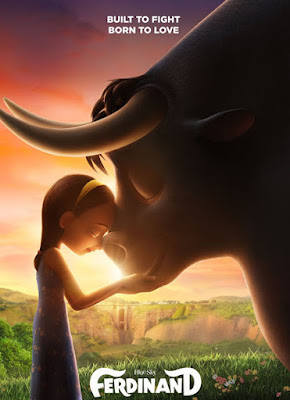 
We first meet Ferdinand (John Cena) as a little calf that loves to smell flowers rather than fighting and become a furious competitor like his dad. However, when his dad fails to return home after being picked to face the matador, Ferdinand runs away and found a new home in a farm filled with flowers. From there she was raised and pet by Nina (Lily Day). Soon, Ferdinand became the bulky and enormous bull on the land but when he mistakenly commits an accident that wrecked a flower festival in the nearby town; Ferdinand finds himself back at Casa Del Toro. Will Ferdinand find another way to go back to his home or will he be picked to face the matador? 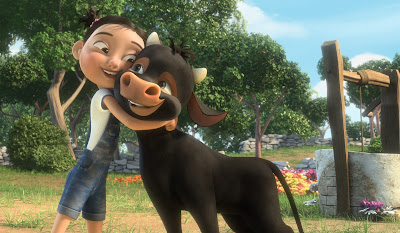 Ferdinand is an animated film inspired from Munro Leaf's 1936 classic tale and after 82 years, they manage to bring this lovely bull to come to life on the big screen. Ferdinand is way charming than it looks on the poster and cuddlier that he first appeared in the pages of children books. It has a very powerful message about bullfighting and animal cruelty, which is spread neatly throughout the film in a fun way.

The story runs smoothly with a fast-pace setting and even the course is pretty much obvious and generic at times; Ferdinand still succeeds in providing quality entertainment not only for the kids but for all ages. It also has a lot lively and colorful characters to remember, which is voiced by talented actors. John Cena turns out to be a perfect fit to lend his voice to Ferdinand. He gives the lovable bull the right mix of charm and strength making him a character to adore. Same with Kate McKinnon who provides a right dosage of craziness to Lupe. Other characters also left a delightful impression, especially the hedgehogs (Una, Dos and Cuatro) and the farm dog Paco.

There are a lot of witty sequences all over this animated feature, which will give laughs and good vibes. There are also lessons to be learned like what John Cena's tag line "Never Give Up" comes into play.

Overall, Ferdinand is a great animated flick to start 2018. It has the right amount of charm, fun and heart that the whole family would enjoy on a big screen.