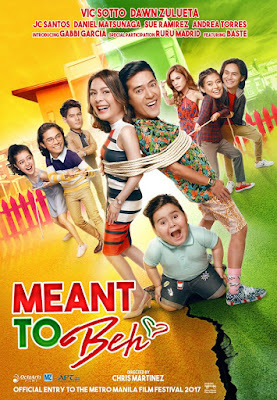 Ron and Andrea (Vic Sotto and Dawn Zulueta) are Mr. and Mrs. Balatbat. They are married with three wonderful kids Christian, Alex, and Riley (Jc Santos, Gabbi Garcia, Baby Baste) but the problem is they can't seem to find the love in their relationship. They are staying in one house for the sake of their kids. Soon, they realize that they need to find a way to be happy again and with the arrival of Agatha (Andrea Torres) and Benjo (Daniel Matsunaga) in their lives; this might be the opening of fresh new beginning or a second chance to work everything out.

Last year's MMFF lineup is an incredible change of scenery for everyone else and when the news broke out that they had to bring back the big films many people already took out their hatred for some of the entries. Meant to Beh is one of those films that was quickly to be judged even the film hasn't come out yet and grace into the big screen.

Well, I can't blame everyone but after watching the film last night in its Premiere Night; Meant to Beh turns out to be a decent entry for the whole family to enjoy. It doesn't have any product placements that ruins the entire picture and has a good story core even its a bit predictable at times. The family themed material really worked well, blended with typical slapstick comedy that works throughout and gave the audience a lot of laughs. The only shallow part is the subplot that involves the Ruru-Gabbi and JC-Sue love teams. Other than that, the film run smoothly kept us entertained from start to finish.

The casts were simply superb. Vic Sotto proves that he still has it when it comes to comedy and even his few wacky facial expressions could do the trick. Dawn Zulueta was pretty remarkable in her role. She is simply stunning and showed that she can still do comedy effortlessly. JC Santos and Gabbi Garcia were both great, but they were out shined by Baby Baste, who took the spotlight with his cuteness and charm. In his young age, he shows that he can already answer to the comedy challenge given to him. On the other hand, Andrea Torres is a revelation, and Daniel Matsunaga was merely an eye-candy to the girls who cheered for him the whole night. There are also a few cameo roles from Maine Medoza, Alden Richards and your favorite lola's Jose Manalo, Paolo Ballesteros and Wally Bayola.

Overall, Meant To Beh is a good film to watch with your family this Christmas Day. Vic Sotto finally got lose from the Enteng series and came up with a decent family-friendly picture that is worth of your hard-earned money. The best thing is that there are no product placements to ruin your mood and a Baby Baste that will keep you smiling throughout.