All of You: Movie Review 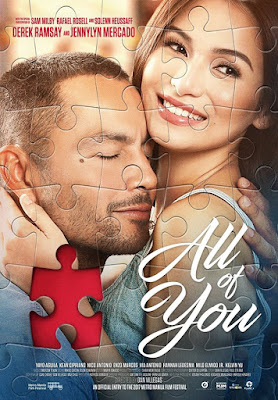 After a painful break-up with Gino his fiancee in 2012, Gabby (Jennylyn Mercado) is still having thoughts on getting into another relationship. Fast-forward to 2014, while working in Taiwan, a news broke that Gino is already getting married and to ease the pain Gabby tries to use a dating app. Into her surprise, she is matched to a bar owner Gab (Derek Ramsay). Their first date made them feel that they are a perfect match, and the two continues to see each other when they came back in Manila. Soon, they both decided to live together but will their easy love connection continue to blossom as a worry-free relationship or will reality finally bite and test them. 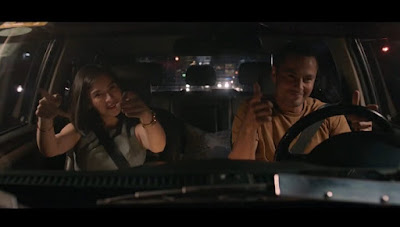 This is the second team-up from Derek Ramsay and Jennylyn Mercado after the successful "English Only Please." The two obviously knew how to compliment each other and look perfect as a couple on screen. I love the way the two threw the lines as you feel the connection, whether they are arguing or being sweet with each other. Derek Ramsay was definitely on the spot with his acting chops. You can feel the frustration in his part, especially when they are bickering with each other. However, not to take away from Derek Ramsay, it is still a questionable win for him for the Best Actor Award. Jennylyn Mercado, on the other hand, was pretty much the same actress we always have admired. She is just on top of her game and delivered an outstanding performance.

As for the story, it was pretty thin but executed neatly. I got mixed feelings while watching it as they started pretty strong and connected well to the audience in under a few minutes of its run-time. However, the film became a bit off when it became repetitive at time,s and the couple became constantly annoying but when it comes to the technical aspects; it was pretty clean and there are no issues from here and there until the end credits.

Overall, All of You was a good film, but it was cliched and predictable at times. Jennylyn and Derek were both outstanding but couldn't pull off the magic without a witty and rich screenplay.

Lakawatsera Lovers rates it 5 out of 10 stars