October 26, 2017
The rainy season generally sees an alarming increase in dengue and similar mosquito-borne diseases, posing a big threat to the health and wellbeing of Filipino families, especially children under the age of 9 and even those that are yet to be born.

Dengue, in fact, one of the top 10 killer diseases in the Philippines. From January 1 to May 20 this year, the Department of Health recorded 35,973 dengue cases throughout the country, with 207 reported deaths within the same period. And while the latest figures are lower compared to last year’s, people must remain vigilant in terms of averting an outbreak of the disease in their communities.

The same Aedes mosquitoes that carry dengue also transmit the Zika virus, a flu-like mosquito-borne disease that is widespread in tropical countries with big mosquito population. As of February this year, the DOH has tallied a total of 57 Zika cases in the country, seven of which involve pregnant women aged 16 to 32. 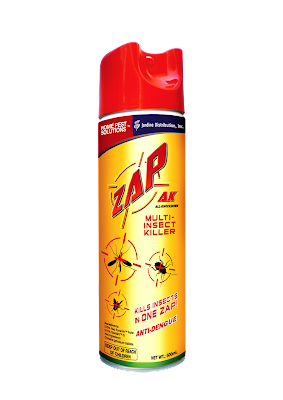 Protect your family from diseases this rainy season and get rid of dengue and Zika virus-carrying mosquitoes with JDI’s ZAP All Knockdown multi-insect killer, with faster knockdown power and long-lasting effect.

While a breakthrough dengue vaccine is reportedly now available, most people tend to overlook the fact that there are more practical and more economical ways to get rid of mosquitoes and other disease-carrying insects.

This is where ZAP All Knockdown multi-insect killer comes in. Distributed by the leading and trusted Jardine Distribution Inc. (JDI), ZAP contains a formula that kills dengue and Zika virus-carrying mosquitoes, as well as cockroaches and flies, without any irritating smell.

ZAP’s high-quality active ingredient—sourced from Sumitomo Chemical, a leading Japanese chemical firm—guarantees faster knockdown power and a long-lasting effect compared to those of other brands in the market. Yet, it is more affordable than its competitors, offering good value for consumers’ money.

Packed in 300ml and 500ml aerosol cans, ZAP is very convenient to use and does not require messy preparation. It also covers hard-to-reach areas.

The DOH itself recommends the use of insect repellants and insect killers as self-protection measures to prevent mosquito bites that can cause dengue, Zika, or similar diseases. Maintaining a clean environment and seeking early consultation with the doctor are also highly advised at the onset of symptoms.

Protect your family from dengue and Zika virus-carrying mosquitoes in one “zap” with the reliable and trustworthy ZAP AK multi-insect killer, distributed by JDI, a leading brand in home pest solutions. ZAP is available in leading supermarkets like Shopwise, Wellcome, Gaisano Malls and NCCC Malls, and DIY stores like Wilcon Depot and Citi Hardware nationwide.

For more information, go to www.jardinedistribution.com.ph.