My Little Pony The Movie (Review) 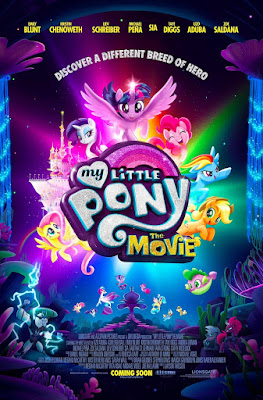 The future of Equestria is in danger with the arrival of Tempest Shadow (Emily Blunt) as she is ordered by the Storm King ( Liev Schreiber) to steal the magic of the pony princesses. Now its all up to the Mane 6 - Twilight Sparkle, Applejack, Rainbow Dash, Pinkie Pie, Fluttershy, and Rarity to step up and save their home. As they embark to an adventure of a lifetime; they will meet new friends, face different challenges and will even test their friendship to a different level.

I really don't have an idea what this animated film is all about, but I know that they do exist and a lot of girls love these adorable winged creatures. I can say that My Little Pony : The Movie is filled with cuteness and charm designed to entertain its target audience, which is the kids, especially young girls. A lot of them really enjoyed last night's advance screening as some of them even wore their favorite Little Pony dresses.

The animation is precise, colorful and lively at all means. However, the story is pretty generic and cliched but still an enjoyable feature, especially for young kids and for the solid fans who had been there since the beginning. There are a lot of characters in the film and its too easy to pick a favorite with Pinky Pie mostly stealing the show.

The film is also backed up with a talented voice cast with likes of Emily Blunt, Zoe Saldana, Liev Schreiber and Michael Peña. They all made a mark and brought life to their characters not to mention that other voice talents were doing two or three characters at a time. We are also amazed at the fact that 80% of the film were made by our very own Filipino animators.

Overall, My Little Pony The Movie is a simple vivid animated film that will surely entertain the youngsters. It has a lot of vibrant tracks along the way and has a strong message about friendship that will benefit its viewers.