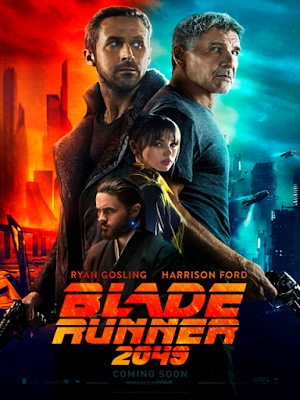 LAPD Officer K (Ryan Gosling), a newer model of its kind, is hired to take down the older models who went rogue.  In one of his missions, he uncovers a hidden secret buried deep in the underground. This leads to a new job in finding a lost kid born three decades ago, which leads him to Rick Deckard (Harrision Ford)- a former Blade Runner who has been missing for the past 30 years.

There is no argument that this film is the most spectacular thing this year when it comes to visuals. It is simply breathtaking and no wonder why a lot of dedicated fans are hailing this as the Best Film this year. However, I am one of those people who has a different view in it. Yes, I admire its majestic visuals right from the start, but the film is hard to sit through with an almost three-hour bloated run-time.  It also has a lackluster story line that needs some spark to give the audience a reason to chew their nails while watching. 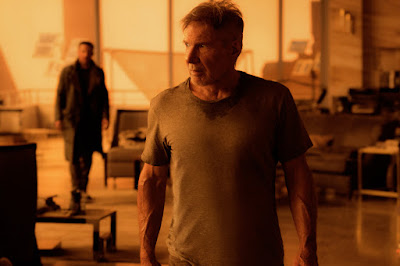 I've already watched five of Denis Villeneuve's films, and all of them has a common denominator of being too slow and too serious for our own good. I loved the Prisoners but hated the Enemy a lot.  Sicario was good, but the Arrival was a tedious alien invasion. Blade Runner 2049 tops these other films but it's still had that Villeneuve formula that makes his films dragging at times.

Ryan Gosling is an excellent lead and performed well in this futuristic flick. Aside from the striking visuals, he and Ana De Armas are the main reason why I didn't get into a snooze fest while watching the movie. It's just a disappointing that Harrison Ford has been sidelined and was given limited minutes. I think if he and Gosling had more screen time together and Villeneuve gave them a little something of action to work with;  this could have been a different ball game.

Overall, Dennis Villeneuve delivers a visually caressing Blade Runner 2049 at its finest. You can't take away the fact that this is an one-of-a-kind film that is best to be seen on an IMAX screen. However, it came up short in providing exciting thrills that the film needed.