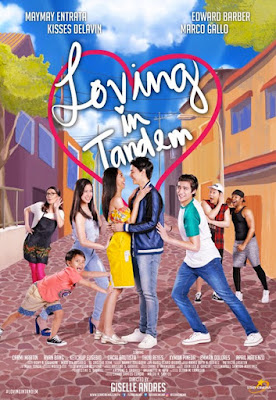 Shine (Maymay Entrata), is a high-spirited girl who will do anything for the sake of her family. When his nephew got sick, Shine is forced to join a group of pickpockets to earn some quick cash for the hospital bills. One of his victims is Luke (Edward Barber), a balikbayan who is forced to live with her estranged mother (Carmi Martin). Shine didn't know that Luke is staying next door and some various situations will give them the chance to know each other.

Another new love team is brought to the big screen to face  the test if they could run their own show. I've been a fan of Mayward since their PBB days, and actually I was excited when the news came up that they will headline their own film. However, the big question is - are they both ready to deliver to the fans who are excited to see Loving in Tandem?

Loving in Tandem has the charm and entertainment factor of the usual romantic comedy formula. It had some good laughs, charismatic cast and a lot of genuine "kilig moments" mostly coming from the lead stars. The thing is, Loving in Tandem has a baffling material which has a lot of problems revolving around the story. It should been better if it just took a simpler route to make it more intact.

The good thing is that the cast answers to the call and made the film energetic and less problematic at times. They managed to provide the energy it needed to keep it afloat throughout the entire film. Maymay Entrata improved a lot since her last acting task at the PBB house and really stepped up to play his A-game. You can really feel the authenticity of her acting as you see into her eyes that what she does on camera is all natural part of her personality. Edward Barbers is your typical boy next door type of guy. He is great playing as Luke and really handled his role well but needs to learn Tagalog in the long run. The supporting casts were terrific, especially Ryan Bang who managed to be the effective comedic relief throughout. The pair of Kisses Delavin and Marco Gallo are also a great addition but didn't have enough time.


Overall, Loving in Tandem is an enjoyable film and even with a thin material; the cast managed to make the film lively as possible. Both Mayward and Kissmarc can be a successful love team but needed a better material for them to showcase more of their talent.