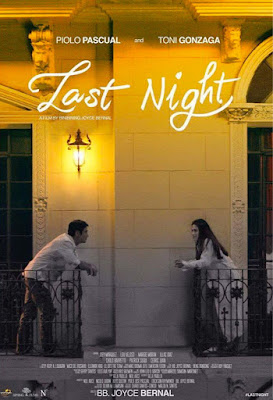 Mark Peters (Piolo Pascual) has decided to solve his problems by jumping off the Jones bridge and end his life. From there, he meets Carmina Salvador (Toni Gonzaga), who actually has the same plan like him but got stuck on a billboard preventing her fall. The two share the same solution to their problems so they both decided to commit suicide together.  However, as the night goes on and the two unexpectedly starts a special bond that connects them well. Will they continue and start something new together or will they let the fate control the seemingly last night of their lives?

The film is not your typical rom-com that you usually see in our cinemas. It has a sensitive material that tackles a serious theme. At first, we can't get the message of the story as there are a lot of questionable things, especially on the part of the character of Carmina. On why she was written that way, with questions flying up in the air the answers were thrown with a twist that will change the course of the story. It also has a cozy soundtrack perfect for this film hitting the tunes at the right moment.

There is no argument that they have picked the best pair to do Bella Padilla's script. Toni Gonzaga and Piolo Pascual are just simply scintillating to watch. I always admire them as actors as they really put their hearts out in each project they make. They are both enjoyable to watch as they give up a great onscreen chemistry throughout. Director Joyce Bernal shows her brilliance in directing making her stars comfortable and effectively uses their talent to create an astonishing film.

Overall, Last Night is plainly weird at the start but as the film marches on and roll its material - it couldn't hide the beauty and message it wants to send to its audience.