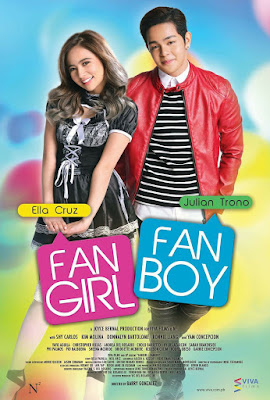 
Ollie Fernandez (Julian Trono) is a one-hit heartthrob who is trying to redeem himself by joining a celebrity search for a Filipino adaptation of a Korean series. There he meets Aimee (Ella Cruz), a talented dubber that voices his crush Soo Mi Young (Yam Concepcion) in the Koreanovela "Program For Love." What Ollie didn't know is that Aimee is already an avid fan since the beginning of his career and vows to help Ollie to achieve his goals and fulfill his dreams to be a star.

Honestly, I really didn't think that I would like the film. We came in with limited expectation and tried to relax while waiting for the start of the film. When it started rolling, we were amazed how Fangirl, Fanboy turned out pretty entertaining right from the very beginning. It has a genuine vibe that can easily get the viewer's attention. Probably because of the oozing chemistry between the two lead stars. 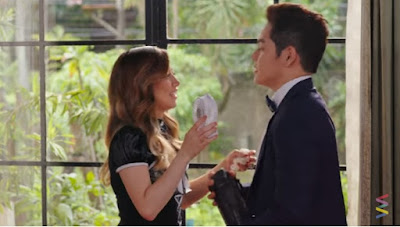 Ella Cruz and Julian Trono acted naturally as if they were just enjoying their bonding together. From their viral dance videos, the two leveled-up  and proved that they could also act well and star in their own motion picture. Ella Cruz provided the wittiness that the character needs and sold us that she is really an ultimate fan girl who will do anything for his idol. She acted well and has that charisma to pull of everything even the material has some lapses at times. Julian Trono was impressive throughout. He has that appealing charm that made the crowd go wild whenever he appears on the screen. He made sure that people can also recognize him  not only in dancing but also in acting. 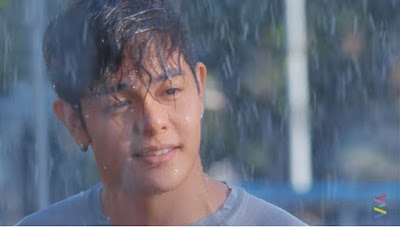 As for the story, it is quite simple yet it is enjoyable at all cost. The "kilig" are at its best coming from the slow motion scenes, cheesy lines and up to the part that made the crowd go wild with screams erupting inside the cinema. There are just some few important key points, especially at the conflict part that needs more stability to hold everything up.

Overall, Fangirl, Fanboy doesn't try too much but still came up with a satisfying romantic-comedy that made us an instant fan of this adorable love team. It is ably acted as Ella Cruz and Julian Trono exhibit a palpable chemistry that makes everything feel so sincere. Hopefully, this is their launching pad for more projects in the future as we are indeed excited to see more from these two future superstars.