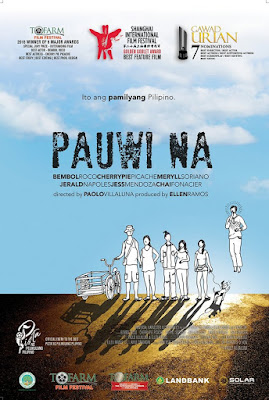 
Pauwi Na is about a story of a family who lives in the slums of Manila. Mang Pepe (Bembol Roco) is a pedicab delivery driver in the market while his wife Remy (Cherry Pie Picache) is a laundry woman in their neighborhood. Their daughter Pina (Chai Fonacier) sells some cigarettes on the street while their son JP (Jerald Napoles) tries to earn some cash in different ways to tend to his blind pregnant wife (Meryll Soriano). Soon, the whole family agrees that they can't take their miserable lives anymore so they decided to take a road trip from Manila to an undisclosed province by pedicab. 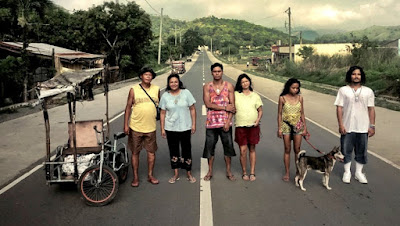 Paolo Villaluna's Pauwi Na is inspired by an article he once read in the Philippine Daily Inquirer where a family decided to go to their province by pedicab because they don't have enough money for transportation. Pauwi Na can be easily compared to Patay Na Si Hesus with the means of the road-trip theme and some comedy aspects, but it separates itself from it as it also provides some emotional key points along the way. It's not entirely pure comedy flick but also gives the viewers something that can play with their emotions in some of the scenes. It shows the everyday struggle of a real Filipino family and what they do in their daily lives in order to survive.

Pauwi Na is pretty compelling right from the very beginning as it sets up a light tone and carried the momentum through the end. It has an awesome cast that knows how to deliver their characters neatly. Bembol Roco and Cherry Pie Picache are both believable in their roles as they portrayed a couple with undying love for each other through thick and thin. Jerald Napoles continues to make his name in comedy, and even he is known for his comic style; he proves that he could also act in a different way and touch the hearts of its viewers at the same time. We are also staring to love Chai Fonacier as she turns to be a gem in this film. After giving us a great time watching her in Patay Na Si Hesus, Chai once again gave a remarkable performance. Meryl Soriano, on the other hand, was terrific playing the part of Isabel. She always had that spotlight whenever she, and Jess Mendoza start a conversation. The two really light up the screen with the delivery of their crazy antics plus the touchy message in the last part. 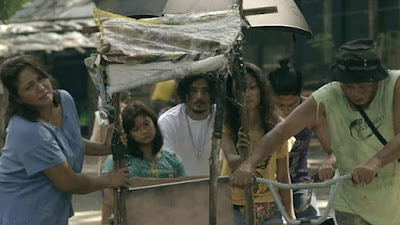 Overall, Pauwi Na is deeply affecting at some points and is carried well by its dedicated and talented cast.  Director Paolo Villaluna turns the inspirational material into gold with a mix of black humor and drama without entering a dull course. It is a one of a kind of adventure that really deserves all the recognition and awards it has received so far.