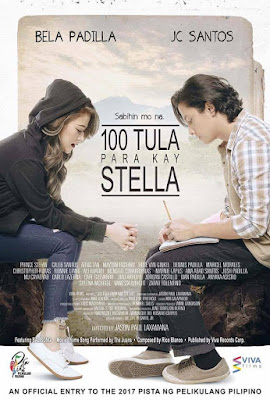 Fidel (JC Santos) is a stuttering freshman who limits himself to three words per sentence. In freshman's night, he meets an aspiring rock star in Stella (Bela Padilla), and immediately the two creates a simple bond to start their friendship. Fidel began to develop his feelings for Stella, but he just expresses it through his writing in a series of poems. However, he can't seem to have that courage to give his writings to her. Will Fidel get that chance for Stella to read his work and know his feelings for her or will fate prevent this from happening and impede their happy ending?

100 Tula Para Kay Stella is a film full of sincerity where in it aims to give the audience a fresh feature to experience on the big screen. It has a compelling script that will get your attention right from the very beginning. It is also pretty simple and doesn't rush or complicate things. Aside from it, the film has an incredible soundtrack where a lot of 90's babies could easily relate into.

The film can easily be compared to Kita Kita with a different concept but will give you the same feeling afterwards. Director Jason Paul Laxamana made sure that he could easily reach out to his viewers and give them a reason to smile, cry , fall in love and hurt at the same time while watching his latest masterpiece. He also got the best out of his two adorable lead stars who both gave their best in making this film remarkable from start to finish. 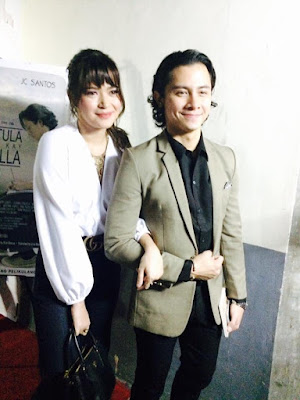 JC Santos was just impeccable in playing Fidel. The stutter speech defect is a difficult thing to do, but he handled it effortlessly. He is not only a talented actor but also a gifted singer as well. On the other hand, Bela Padilla continues to impress. She is a versatile actress who is up to any challenge given to her at any time of the day, and even I don't like her character here in the film; Bela is simply hard to hate because she is always a mesmerizing actress.

Overall, 100 Tula Para Kay Stella is a romantic film wrapped in a box filled with surprises. It is beautifully filmed with a well-written heart-wrenching material. JC Santos and Bela Padilla are both charming in every way.