When Pain Demands to be Felt

Since its Manila premiere in 2016, during the World Premieres Film Festival, where it bagged the Special Festival Prize for its Universal Social Values and the Best Actress award for June Lojong, "Beautiful Pain" (originally titled "Redha") has since traveled the world, eventually being Malaysia's official entry for Best Foreign Language Film at the 89th Academy Awards.

The film is a family drama that deals with the subject of autism, and tells the struggles of Alina (Lojong) and Razlan (Namron), as they come to terms with the discovery that their son Danial has autism (played by two young actors Harith Haziq and Izzy Reef). Marking her directorial debut, Malaysian filmmaker Tunku Mona Riza attacks the subject of autism with empathy, bringing to light a mental issue that is commonly misunderstood.

As "Beautiful Pain" returns to the Philippines for its theatrical run, PLM Film Society spoke with Tunku Mona Riza to know more about the film, and the journey it has taken so far.

PLM Film Society: What inspired you to tackle the subject of autism for your film?

Tunku Mona Riza: From a lengthy chat I had with a couple (who are my friends), whose daughter was diagnosed with autism. I knew them for a long time yet I don't know much about their struggle. My friend always says "if you don't live with one, you will never know." She is absolutely right.

PLM FS: What preparations did you make before and during filming, in telling the story of Redha/Beautiful Pain?

TMR: I spent two years of observation and research and (became a) part of two families who have autistic children. Out of seven days a week, I spend six days with them. Every time I am with them (the autistic boys), I video record them. I attend their therapy sessions and spent as much time as I can with them and their families. Like my friend once said "if you don't live with one, you will never know," hence the two years of being part of their lives.

PLM FS: Beautiful Pain was originally titled Redha. Could you explain a little bit about what "Redha" means?

TMR: Redha means to accept something, or situation, or person wholeheartedly without questioning the fate one is going through.

PLM FS: What was the perception of autism in Malaysia before and after your film came out? Were there changes that you've seen?

TMR: Before it was released, many aren't sure of what autism is, and after the film was released, the awareness was much better. Families living with autism said to me that the year "Redha" was released (2016), the awareness was brought to a greater new height that was never achieved before. During the release of my film, the changes I saw - well, many celebrities and a Parliament Minister came forward to say they, too have a child under this spectrum.

PLM FS: Aside from your home country, "Beautiful Pain" has also been shown abroad. How was the reception to the film? Did it vary per country?

TMR: The screening via film festival was very positive and encouraging. I realized that many could resonate to my film, irregardless of different backgrounds and nationality.

PLM FS: How did the film affect/change you as a filmmaker and as a parent?

TMR: Throughout the "Beautiful Pain" journey (from then till now), (it) has given a great impact to my personal life. It has made me more grounded, more humble and less judgmental towards any situation. I now appreciate small things than big things. Small achievements should be applauded. My kids and I have a much better relationship. My husband and I appreciate a simpler life, compared before. We always say this to ourselves - "if we are having a hard life, others are going through worse." 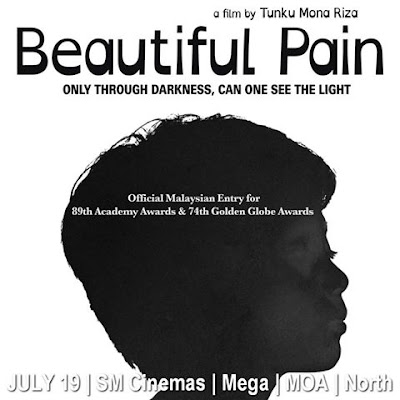