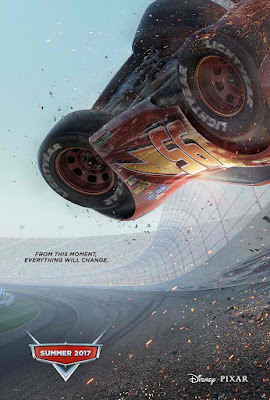 
Lightning McQueen (Owen Wilson) is already feeling that his racing career is almost over as young rookies completely dominate the race track and sending out retirement forms to his buddies from his generation. After get beaten by Jackson Storm (Armie Hammer) McQueen vows to get better and faster to prove that he can still race. With the help of a new trainer in Cruz Ramirez (Cristela Alonzo) Lightning McQueen tries an extraordinary training and soul searching before he aims greatness for the last time.

After a good but forgettable sequel, Pixar brings back Lightning McQueen to the race track as he battles his age to the path of his legacy. Some may say that the Cars franchise is the weakest among the creation of the brilliant minds in Pixar, and the disappointing second part was the reason to put this franchise on the top of the shelf. However, Pixar proves that Lightning McQueen and his crew still have a lot of gas on their tanks as the third and hopefully the final film for this saga was created impressively as the ending was a complete turnaround of what I expected.

The plot was predictable until that last part but like the other films Cars always had that heartfelt story to tell. It may lack that humor to burst those youngsters to laughter, but it surely had that style and appeal on the screen. There is also a slight upgrade to those animated visuals as some of the scenes feel so alive and refreshing to see on 3D.

The attempt to reinvent this franchise pays off as Cars 3 has the bandages to patch up the damages it left from the previous installment. It's not that I didn't enjoy the sequel, but it is more of putting extra work so it can match the same charm of the first film.

Overall, Cars 3 successfully reached the finish line with a first place trophy. For me, it passed the greatness of the first film, and this installment serves as the best for this franchise.