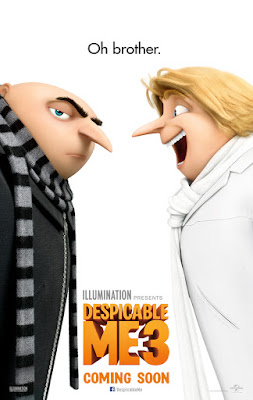 After a failed attempt to capture the newest super villain in Balthazar Bratt (Trey Parker), Gru and Lucy (Steve Carell and Kristen Wiig) were fired by their boss out of the Anti-Villain League. However, an unexpected turn of events went into excitement when Gru learned that he has a twin brother. Together with the kids and his wife, Gru travels to meet his twin brother Dru (Steve Carell). Soon, Dru wants to bring his brother back to the villainy side, but Gru will only take the offer if they steal the largest diamond in the world from Balthazar Bratt.

The Minion fever is back and now on the fourth film after the Minions took the screen with their solo film in 2015. It is easy to say that the franchise might get tired, and they couldn't offer something new to its fans. Well, worry no more as Despicable Me 3 had a lot of surprises in store in this chapter. The opening minutes alone will surely bring out the smiles with the dance battle between Gru and the newest bad boy in Balthazar Bratt.

The film has the same formula where they relied heavily to its slapstick humor. The colorful minions remains to be the highlight of this film doing the things that will actually entertain everyone plus a remarkable choreographed sing and dance number that will make you love them even more. When you thought, they would actually run out of ideas for this franchise, they introduce us to brand new characters that are simply a welcome addition to the Despicable Me Family.

Steve Carell and Kristen Wiig show their voice mastery and brought life to their adorable characters. While Agnes (now voiced by Nev Scharrel) remains to be the cutest girl ever is still filled with a lot of energy to spark every scene. The story line is pretty simple yet can easily attract and entertain every audience of any age.

Overall, Despicable Me 3 can't really reach the same charm and wit of the first film but still know what to serve to its target audience. It is an enjoyable worthy animated flick that will surely entertain the whole family.