Hamilo Coast, SM Prime’s sprawling coastal community located in Nasugbu, Batangas is home to diverse marine resources. One of the abundant naval species thriving in Hamilo Coast are marine turtles, particularly the Olive Ridley sea turtles. Though they are the most abundant among marine turtle species, they are listed as “vulnerable” by the International Union for Conservation of Nature (IUCN) because of the recent decline in the nesting of female Olive Ridleys. 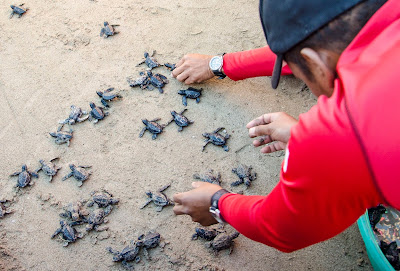 147 Olive Ridley sea turtle eggs hatched in Hamilo Coast and were released back to the sea by residents and members of Pico de Loro Cove.

Just last February 2017, a total of 147 Olive Ridley sea turtle eggs hatched on the pristine white sand beach of Santelmo Cove, Hamilo Coast’s main marine sanctuary. The eggs were laid early this year and were closely monitored by the Hamilo Coast Sustainability Team, until they hatched and were strong enough to swim back to the sea. With its coves as frequent nesting grounds of marine turtles, Hamilo Coast is dedicated to the regular monitoring of these species’ activities as part of its sustainable efforts in marine conservation. 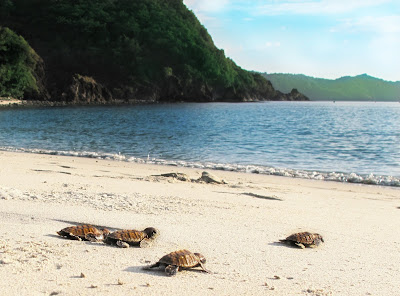 The coves of Hamilo Coast are a frequent nesting ground of sea turtles –particularly the Olive Ridley, one of the five species of marine turtles found in the Philippines.

Simultaneous with continuous improvements in its residential and leisure developments, Hamilo Coast puts sustainable practices at the forefront of its vision. Ridge to reef management is given utmost importance to help protect the corals and to continuously monitor and address possible ecological threats. Initiatives include the declaration of select coves as marine protected areas, assistance in the organization of Bantay Dagat units to protect the locale waters from illegal fishermen, pawikan conservation, marine mammal rescue training, and the cultivation of true giant clams.

Together with the World Wide Fund for Nature (WWF) in the Philippines, Hamilo Coast has been championing environmental conservation, evident in its operations and the numerous initiatives it partakes within the development and its neighboring communities. Hamilo Coast’s sustainability programs are acknowledged by EarthCheck, the world’s leading scientific benchmarking, certification, and advisory group for travel and tourism, and was awarded the Bronze Benchmarked status, thus making Hamilo Coast the first residential resort development in the Philippines to be awarded such.