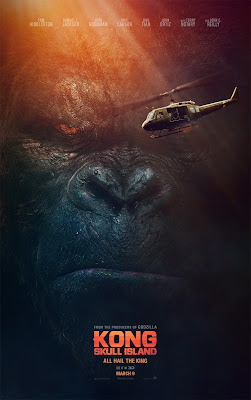 
At the end of the Vietnam War,  Bill Randa (John Goodman), the leader of a research team known as the Monarch requests his superiors to grant his team to push through to an island expedition that has terrifying secrets waiting to be uncovered. Aided by a former British Special force James Conrad (Tom Hiddleston) and a group of soldiers led by Col. Preston Packard (Samuel L. Jackson), they embark on a journey to the unknown and caught them off guard with a massive king ready to defend his territory. 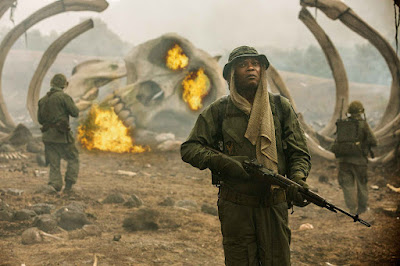 At first, I thought that Kong will just be a loud and disastrous film waiting to be lambasted by the critics. But after watching the advance screening of it last night, everyone will surely agree that the king has finally returned uproariously on the big screen. The film is definitely a visual treat and one of the most exciting films released this year. The pace picks up slowly but punches neatly to the story leaving a solid uppercut when Kong enters to the picture.

It was a thrill all throughout as the film never got into trouble because the entire thing was amazing. The story was simply constructed, but the delivery was just stupendous. Kong was given life by the CGI technology but looks perfectly fine as you'll feel his strength and fury, especially on the IMAX Screen. There are a lot of jaw-dropping moments that will keep you thrilled and leave you breathless as the 3D effects also added some extra dimension to the picture.

The film is all about monsters, but we can't simply take away the fact that the movie has a nice set of outstanding stars who made their presence felt. Tom Hiddleston, Samuel L. Jackson, John Goodman and Brie Larson all delivered a worthy performance,  and the ever reliable John Reilly breaks up the glass with his funny lines.

Overall, Kong: Skull Island is one of those films you definitely need to see on the big screen. It is a monster film at its finest - relentlessly entertaining from start to finish. I am already excited for the gigantic showdown scheduled three years from now. Please wait till the end of the credits for an exciting short teaser.