Get Ready For The New Trailer of “GUARDIANS OF THE GALAXY VOL. 2”

Anyone can save the galaxy once. Obviously.

In anticipation of the earthbound release of Marvel Studios’ “Guardians of the Galaxy Vol. 2” on April 26 in the Philippines, Marvel Studios has unveiled the action-adventure’s new trailer!

Take a look at your favorite intergalactic misfits saving the galaxy a second time. Along with the new trailer, Marvel has also launched a new Guardians poster which may be seen below.


Guardians of the Galaxy Vol. 2 is written and directed by James Gunn. The film marks the return of the original Guardians, including Chris Pratt as Peter Quill/Star-Lord;  Zoe Saldana as Gamora; Dave Bautista as Drax; Bradley Cooper as the voice of Rocket; Vin Diesel as the voice of Groot; Michael Rooker as Yondu; Karen Gillan as Nebula; and Sean Gunn as Kraglin.  New cast members include Pom Klementieff, Elizabeth Debicki, Chris Sullivan and Kurt Russell.

Set to the backdrop of ‘Awesome Mixtape #2,’ Marvel’s Guardians of the Galaxy Vol. 2 continues the team’s adventures as they traverse the outer reaches of the cosmos. The Guardians must fight to keep their newfound family together as they unravel the mysteries of Peter Quill’s true parentage. Old foes become new allies and fan-favorite characters from the classic comics will come to our heroes’ aid as the Marvel cinematic universe continues to expand. 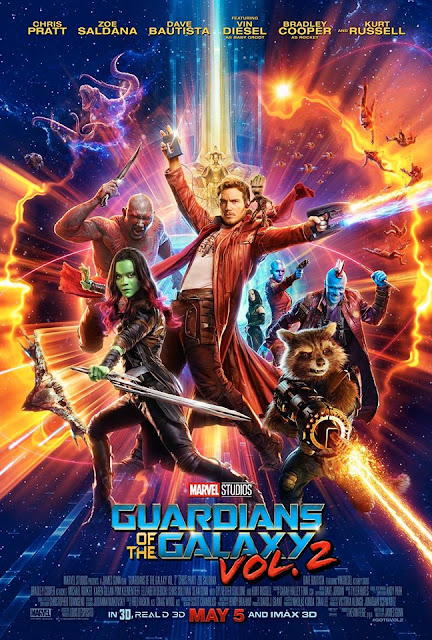