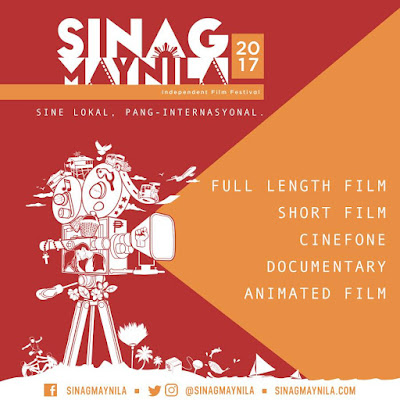 Sinag Maynila Film Festival is ready for its third season!

The local film festival’s new tagline “Sine Lokal, Pang-Internasyonal” lives up to its core as the roster of finalists handpicked by Sinag Maynila CEO and Founder Wilson Tieng and world-renowned and internationally acclaimed film director Brillante Ma Mendoza have been announced. “The upgraded mechanics for this season may have been a risky move, but we are very happy with the outcome,” says Tieng. “We are looking forward to the reception of these films here and of course, internationally.”

With the tremendous success of Sinag Maynila’s debut in March 2015, more talented filmmakers took their chance in getting a nod to be part of the competing roster as it has been closely associated with the opportunity for international recognition. This year’s categories include Full Length, Short Film, and Documentary.

KRISTO by HF Yambao
The story delves into what is supposed to be a victorious day for Boy whose first born; Jemjem, graduated from elementary with honors. Throughout the story, bits and pieces of fighting against oppression of losing his main livelihood as a vendor, of fighting for his winnings in a bet to game fowls, fighting for his honor as a family man, and eventually fighting for his own life against fate will be revealed. “KRISTO” stars Angela Cortez, Julio Diaz, Kristoffer King.

BEYOND THE BLOCK by Ricardo Carranza
Spanning fifty years and charting a path across three continents, “Beyond the block” weaves a thoughtful, personal account of Hip Hop Dance in the Philippines. From the sensational TV program of “Penthouse 7” in the 70s to the cult classic “Dance 10” in the 80s to the struggles of Filipino contingents in today’s biggest international dance competitions, the film lovingly showcases the special place of dance in every Filipino life.

LADYFISH by Jason Orfalas
Expelled from her nine-year occupation in the call center industry and discriminated upon because of her homosexuality, Kaye Cienfuegos, struggles to make ends meet. Her search for place and identity is cut short when her best friend Bonn appears on her front door with her adopted Swedish son Bjorn, and together they face obstacles to provide for their basic needs and rights in a society where a fair chance is out of reach. “LADYFISH” stars JC Santos, Martin Escudero, Brenda Mage, Ruby Ruiz.